Groom Drops Bride’s Ring In Lake Tahoe During Wedding Ceremony, But A Scuba-Diving Stranger Came to The Rescue

An unlikely Hail Mary turned one couple’s wedding day fumble into an unexpected ring recovery. Newlyweds Andrew and Marlee Kent recount the moment their perfect day took a turn for the worse, when Andrew accidentally dropped Marlee’s ring into the frigid waters of Lake Tahoe as they were exchanging vows.

The ceremony took place on the pier at Sugar Pine Beach, and between the wind and the nerves that often come during weddings resulted in Andrew fumbling with the ring before dropping it on the pier, where it slipped between the cracks and fell in the water below.

Video footage of the day caught the entire moment, and the couple can be seen peering through the cracks of the peer and desperately looking for a glimpse of the ring.

Marlee Kent shared about the moment with SACRAMENTO CBS:

“Honestly, I thought, ‘This can’t be happening. Like that didn’t just happen.'”

As the coupled looked through the planks of the pier, they could see the ring tauntingly staring back at them. But it was not the time to jump into almost freezing water to rescue the piece of jewelry, so after the ceremony and the day’s celebration was over, the couple took a chance that had a huge payoff.

The couple posted a plea for help on a Facebook group for Lake Tahoe scuba divers, sharing the details of their ring fiasco and asking if anyone would be willing to search the area under the pier for their ring. 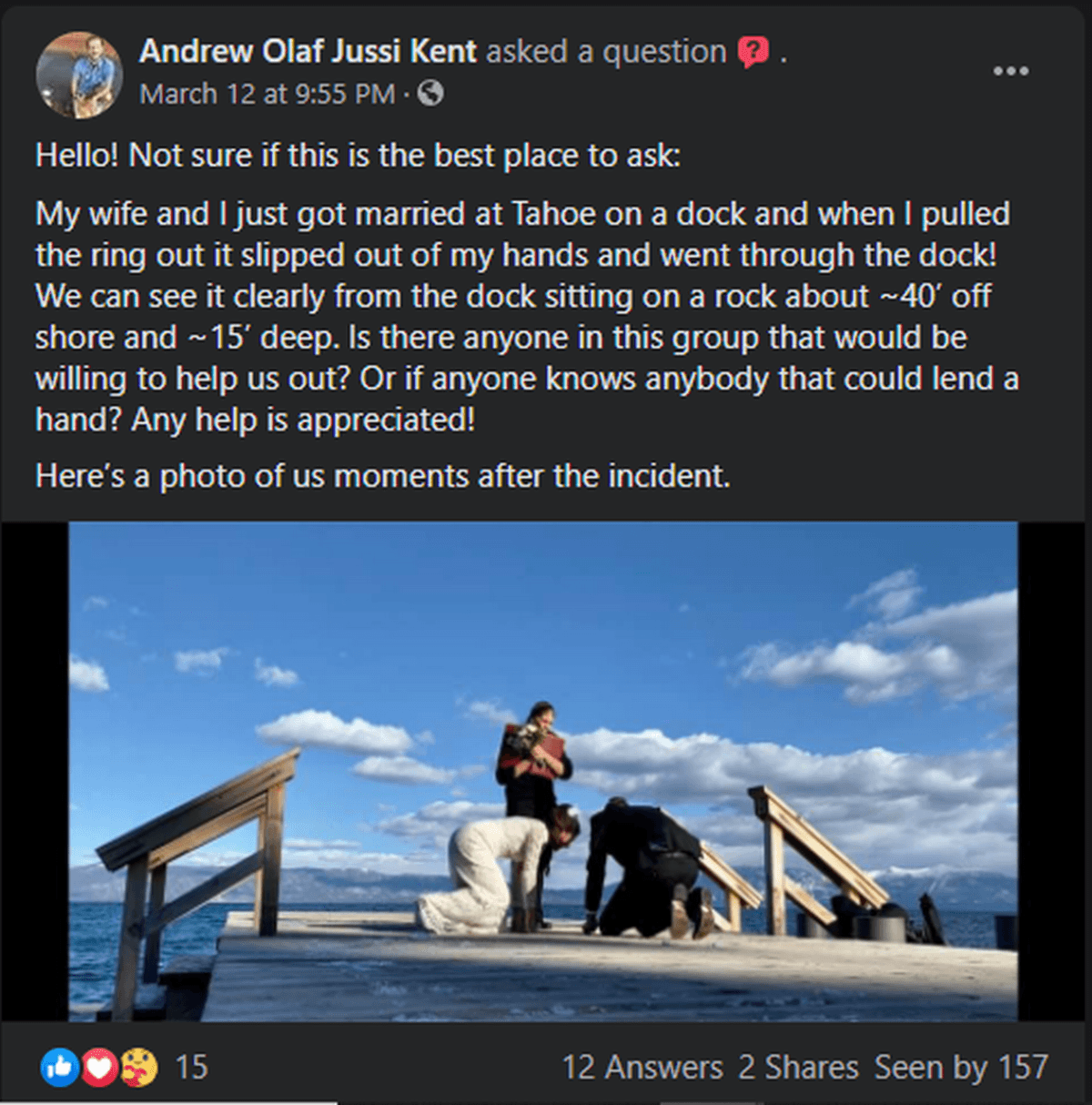 Group member Phil Abernathy responded saying he would be happy to try and help the couple, and he was soon searching the waters at Sugar Pine Beach.

“The water was 41 degrees, [a] dry suit was needed,” Abernathy said of the expedition. “We start to move some of the little rocks out of the way and obviously, as we start to move them some silt starts to form.”

Abernathy finally set eyes on the ring, which was nestled between some rocks, and he said he had to fight off a crawfish before he managed to get hands on the jewelry. But the shouts of victory as he emerged with the ring were only added to the excitement of the moment.

The Kent’s are grateful to Abernathy for turning a bad situation into a memorable story for them to tell for years to come.

“I’m so thankful to have my ring back but either way it’s a great story to tell our kids one day,” Marlee said. “And makes the day more memorable.”