A Dallas area ice cream shop is working hard to change some of the stigmas towards people with special needs. Businessman and restauranteur Tom Landis founded Howdy Homemade with the intention of only hiring workers who had special needs with the hopes that it would change some of the misconceptions about individuals who have been diagnosed with disorders such as autism and Downs Syndrome. 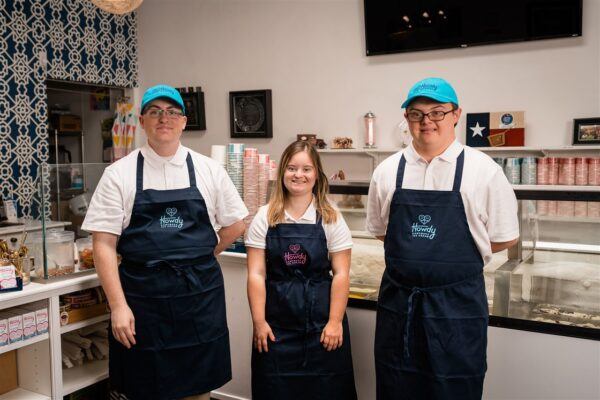 Landis’ new business idea was inspired by an interaction he had at another restaurant he owns, when he met a man who would change his life, and whose life Landis would also go on to change.

“It was a real busy night at one of my other restaurants when I met Coleman (Jones), and he just immediately jumped in and helped serve food and was super friendly,” Landis explained on TODAY. “I called his mom up the next day and said, ‘Hey, you know, I want to hire this guy.’ He has so much potential, written all over him, and leadership.”

Coleman Jones, who is now the face of Howdy Homemade and also has Downs Syndrome, was ecstatic to have the opportunity to work and make money for himself.

“I was blessed that I ultimately get the opportunity to not only be employed for Tom, but to also be an asset where you’re going to blossom,” Jones said.

The shop has become an icon in the area, with locals flocking to the store during the summer months to receive a delicious sweet treat, and equally sweet and delicious service by the crew of very special employees.

But like the majority of businesses in 2020, Howdy Homemade was hit hard by the coronavirus pandemic, with Landis shutting their doors for a while to ensure the safety of his employees and customers. But after reopening, business never picked up, and the store was in risk of having to permanently shut it’s doors.

“I think it got to the point honestly where it took absolutely a very clear message of me realizing ‘You know what? I can’t do it. I can’t do it, and it’s time to throw in the towel,'” Landis said. “And I honestly think that’s when God said ‘You can’t do it? Yep, no, you can’t. But you know what? I’m going to surround you with a village of people, people from all over Dallas.'”

And that’s exactly what happened. A GoFundMe campaign was created by a friend, and the community came together in true Texas spirit to help out their neighbor, raising a whopping $100,000 for the little ice cream shop.

But the blessings and support didn’t stop there. The attention garnered by the success of the GoFundMe landed Jones and Landis on a segment of TODAY with Hoda and Jenna. During that segment, the duo was surprised by another incredible gift by Marcus Lemonis, host of CNBC’s The Profit, he gave Howdy Homemade a $50,000 grant to continue the life-changing work Landis started.

“I spend my whole career, my whole life, really helping businesses get to the next level and it’s clear to me that you guys are prepared to get to that next level,” Lemonis said. “I would like to give you a $50,000 grant specifically used to hire more people to grow what you’re trying to do in the Dallas community.”

“It’s humbling,” said Landis, who was already using the money raised through the GoFundMe account to purchase a food truck and create more jobs at the ice cream shop.

“We’ve had multiple times where you just stop and tear up because it’s no longer our restaurant. It’s truly the City of Dallas’ restaurant,” he said. “People are not supporting Howdy Homemade because of Tom Landis. They’re supporting it because of Coleman and the others, and I think as more businesses start to realize that, the world will change.”

Watch a video posted by CBSDFW on the incredible story below: