The disruption to daily lives caused by the coronavirus pandemic reaches far and wide, with no aspect of life remaining untouched. Vacations, weddings, births, and even deaths have all been affected in how they are approached and managed.

This was especially true for one new mother from St. Louis, MO. 28-year-old Monique Jones was 6-months pregnant when she was admitted into Barnes-Jewish Hospital with a severe case of COVID-19. ICU nurse Caitlyn Obrock was assigned to help oversee her care, and immediately connected with the young mother. Monique made it clear that her baby was to take priority over her own life, and Obrock worked hard to care for both of her patients.

“From the very beginning Monique was special to me,” Obrock said.”

Jones was so ill that she eventually needed to be intubated, but that didn’t stop Obrock from tending to not just her physical needs, but also her emotional and spiritual needs. The devoted nurse spent hours by Jones’ bedside, talking to the her and praying over Monique and her baby. It eventually became evident that Monique’s body was not strong enough to fight the virus that was ravaging her body, while also continuing to sustain the life growing inside of her.

Her doctors decided and emergency C-section was the only remaining option to preserve the life of her child while giving Jones’ body only one task to focus on. That’s when Obrock made a promise to her favorite patient:

“I was like, if Monique makes it, we’re going to throw her the biggest baby shower there is to have,” Obrock said.

And that’s exactly what Caitlyn Obrock did. Little Zamyrah entered the world extremely premature and weighing only 2lbs, 5oz. Caitlyn set to work reaching out to friends, family, and coworkers who all generously pitched in to bless the brave mother and her sweet new baby girl. With the thousands of dollars Obrock raised, she kept her promise to Monique and threw her an extravagant shower to celebrate the birth of Zamyrah . 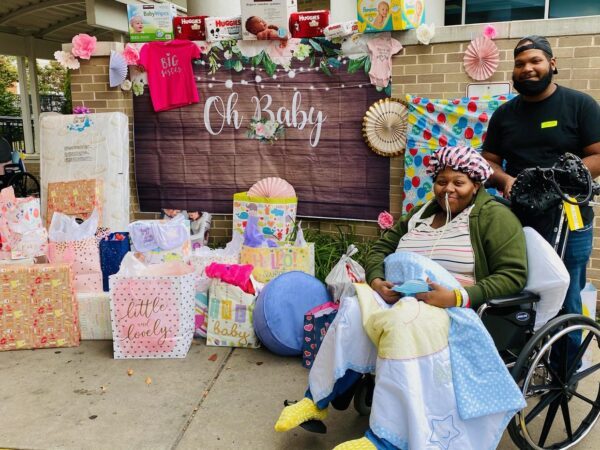 In an interview with CBS, Jones had tears streaming down her face as she spoke of the kindness shown to her and her daughter by Obrock:

“I just started crying as soon as I saw everything, like this couldn’t be for me. I never really felt that special to somebody. I really needed somebody like her,” Jones said.

Her patients have since been discharged, but that doesn’t stop Nurse Caitlyn from visiting her favorite patients regularly. Mr. and Mrs. Jones honored Obrock in a big way by asking her to serve as Zamyrah’s godmother, a role Obrock joyfully took on for her new best friend’s daughter.

“It’s not a matter of politics, it’s just a matter of loving people,” Obrock said. “That’s what we need. Days that I feel like I can’t go anymore — through those hard days when I don’t think my patient is going to make it — I just know there’s another Monique that needs us.”