Brand new parents Kyle and Kelsi Pierce welcomed their first two biological children two months apart. How is that possible, one may wonder? The answer is: modern medicine and a mother’s love.

Kelsi had struggled to get pregnant naturally since marrying her husband Kyle in 2016, and was eventually told it would be almost impossible for her to ever grow and carry her own child. Her doctors discovered that Kelsi suffered from a low ovarian reserve, and that both of her tubes were blocked.

Devastated, the couple began investigating other means of growing their family they so desperately wanted. First trying IVF and successfully creating five healthy embryos, the Pierces soon learned that Kelsi’s uterine lining was too thin and the embryos were never able to implant. Trying everything possible in an attempt to thicken the lining, nothing succeeded.

In speaking to PEOPLE, Kelsi shared “I was like, ‘I will try anything. You give me something and you tell me it would take five years off the end of my life, I don’t care. I want a baby.’ I would do anything. We were just desperate.”

Kelsi’s mom, 54-year-old Lisa Rutherford, stepped up in a massive way and offered to be a surrogate for the Pierces. Lisa had a read a similar story in PEOPLE a while back and immediately told her daughter and son-in-law that she was more than willing to serve as their surrogate, should they ever choose to go that route. 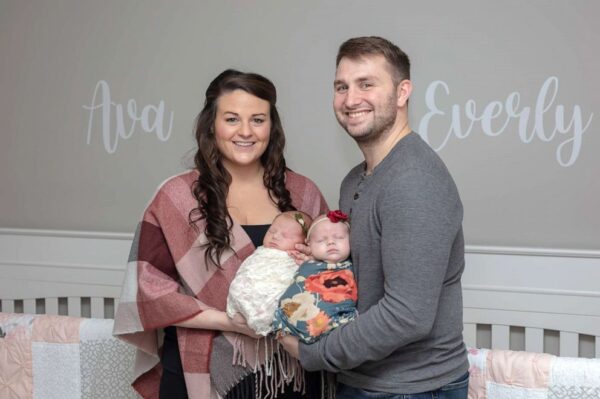 Kelsi and Kyle Pierce with their daughters, Ava and Everly

Still optimistic that Kelsi would eventually conceive on her own, the Pierces thanked Lisa for her generous offer, but didn’t give it any real consideration. Eventually though, Kelsi’s doctors came to the hard conclusions that they had exhausted all their options, and that the Pierces. Ended to accept that Kelsi would never carry a child.

Fast forward to 2019 when Kyle and Kelsi reached out to Lisa, asking if her surrogacy offer still stood. Lisa was in 100% and immediately began the investigation on whether she was medically fit to serve as Kelsi’s surrogate.

“After we had talked about it the first time, it was always in the back of my mind,” Rutherford says. “So I called a couple of fertility doctors in Michigan and I think three of them said, ‘No, you’re crazy. We’re not going to do that.’ [But] I found this one and she was awesome. She said, ‘Yep.’”

Lisa, who had not been pregnant for more than 30 years, began preparing her body to carry a child again. By February of 2020, The Pierces learned that the IVF on Lisa had worked and they would finally become parents. But the expectant parents had no idea that their blessings were about to double.

One month after learning that Lisa was pregnant, Kelsi took what had now become a routine pregnancy test. On March 24th, Kyle and Kelsi got the surprise of a lifetime when they discovered that Kelsi had become pregnant. The Pierces were now expecting not one, but two children within a matter of weeks of each other.

“It wasn’t anything I thought was even a possibility,” she says. “When I saw the two lines I was completely in awe because I had never seen two lines. I had gone so crazy where I would check them every month and I would try so hard to see lines that weren’t there… So to see it plain in front of my eyes, I was like, ‘No, no, this is a faulty test.’ I didn’t want to get my hopes up, but it was so crazy and exciting.”

The mother-daughter duo said they enjoyed being pregnant at the same time, strengthening a deep bond that already existed. “I’ve always said my mom’s my best friend,” Pierce says of their bond. “If something bad is happening or I’m having a bad day, she’s who I reach out to. And if something good has happened or I’m excited about something, she’s who I reach out as well. We talk like, five times a day, every day.”

Lisa is especially grateful that Kelsi was going to see her dream of having multiple children come true. As a teacher, Kelsi is around children all day, which only increased her desire to have a family of her own.

On October 1, Lisa gave birth several weeks early to Everly Rose. After spending 5 days in the NICU, Everly finally came home to the parents who had prayed for her for years. Her homecoming also happened to fall on Kelsi’s birthday. 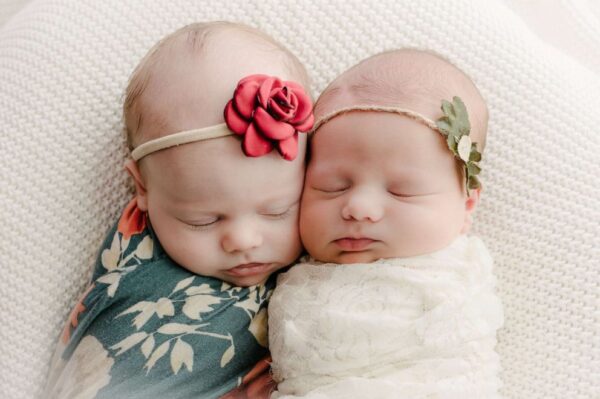 It still feels surreal to me,” Kelsi says. “I’m so excited to where they can just notice each other and see what they do. It’s just so amazing. I just stare at them for however long and I’m just like, ‘I can’t believe you’re mine.’”