Written By Mark Baker
2 weeks ago

Reporters have just dug up an old resume of Meghan Markle’s that shows she is not someone to be messed with.

The Mirror reported that the resume shows that Meghan not only speaks multiple languages, but is also trained in martial arts and kickboxing.

“I trained Meghan when she was in Toronto during the shooting of the series ‘Suits’. We did a little bit of martial arts, a little boxing, and sometimes kickboxing,” revealed Jorge Blanco. “I never really thought she could end up being a princess! I had a great time training with her because she’s super nice and speaks Spanish, with an Argentine accent.” 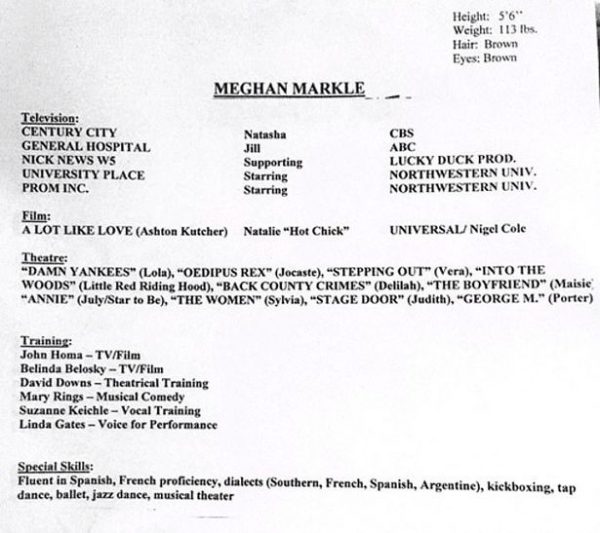 The sheet also says that Meghan can do ballet, jazz and tap dancing as well as musical theater. In addition, Meghan claimed to be fluent in Spanish and proficient in French.

Do you know our Duchess of Sussex ,Meghan Markle is trained in martial arts and kickboxing ?!…..https://t.co/ny2iap24RD pic.twitter.com/QFujG8LFFB

Since stepping down as a senior member of the British royal family last month, Meghan has moved back to her hometown of Los Angeles, California with her husband Prince Harry and their 1 year-old son Archie. Prior to her marriage, Meghan spent years starring on the television show “Suits,” and it is believed that she intends to resume her acting career again. She has already participated in her first post-royal gig by narrating the Disneynature documentary “Elephants,” and it is believed that she wants more acting roles in the future.

Check out the trailer for ‘Elephant’ narrated by Meghan Markle and ‘Dolphin Reef’ narrated by Natalie Portman – Coming to #DisneyPlus on April 3
(via @Disneynature)pic.twitter.com/UUcmuKtCUU

“Meghan said her work with Disney is far from over. The voice over is just the beginning and that there’s more collaborations to come,” one source said earlier this year, according to Daily Mail.

Meghan and Harry are currently living in the $18 million mansion of Hollywood mogul Tyler Perry while they look for a home of their own in the Los Angeles area, making it clear that they fully intend to stay in California for quite some time.