Halloween is right around the corner, which means Americans everywhere are heading out to stock up on candy. If you’re having trouble figuring out which candy to stock up on the most, a new map has been released that is sure to help you out with that!

The map, which was created by Bid On Equipment based on Google search volume, shows the most popular Halloween candy in each state. According to the map, Reese’s Peanut Butter Cups is the most popular candy in twelve states, while Chocolate M&M’s is the most beloved candy in eight. Milk Duds and Snickers then tied to come in third with five states each.

Chocolate came out as the clear winner on the map, since only ten states preferred candies that were not chocolate bars. Hot Tamales were the most popular candy in three states, while AirHeads, Nerds, Red Hots, SweetTarts, Swedish Fish, Jolly Rancher and Gummy Worms each took one state.

Major U.S. cities, however, seem to have different opinions when it comes to candy: 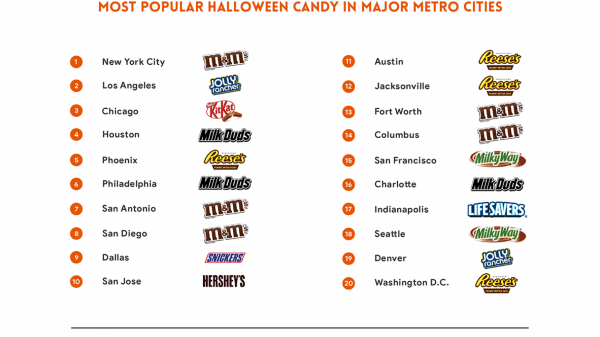 Though the KitKat is the most popular candy in California as a whole, San Francisco preferred Milky Way, while Los Angeles stood behind Jolly Rancher and San Diego chose M&M’s. Meanwhile, San Jose was the only major city to pick plain old Hershey bars.