An unidentified woman is being shamed on Reddit this week after she parked her car over the line in a parking lot and proceeded to lecture another driver for parking to close to her driver’s side door.

The woman herself took to Twitter to vent her frustration when she noticed that the car in the next spot over was so close to her driver’s side that she couldn’t possibly get in that way. She added that she even lectured the other woman on her parking liability, despite the fact that her own vehicle was clearly parked over into a second space.

The photo that the woman posted shows her red car parked on a slight angle, spilling several inches over the parking lot line into the next space. Next to her vehicle is a gray car that is parked straight and in the lines, but is just a few inches away from the red car, making it hard for her to get in the driver’s side door. 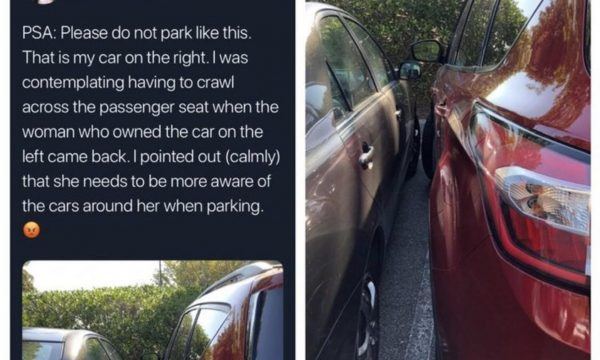 “PSA: Please do not park like this,” wrote the woman who own the red car. “That is my car on the right. I was contemplating having to crawl across the passenger seat when the woman who owned the car on the left came back. I pointed out (calmly) that she needed to be more aware of the cars around her when parking.”

However, this backfired on the woman with the red car when Reddit users immediately let her know that she was in the wrong.

“Lol you gotta be a special kind of entitled to park over the line and blame it on someone else,” one user commented, with another adding, “Oh my god, I think my head just exploded from this woman’s lack of awareness.”

What are your thoughts? Have you had a parking incident like this one? Let us know in the comments section!