Princess Beatrice Announces That She Is Engaged

It has just been announced that Princess Beatrice, the granddaughter of Queen Elizabeth, is engaged to her  boyfriend, property developer Edoardo Mapelli Mozzi, who proposed earlier this month during a vacation in Italy. The news was announced in a statement by Beatrice’s parents, Prince Andrew and Sarah Ferguson.

“The Duke and Duchess of York are delighted to announce the engagement of Princess Beatrice to Mr Edoardo Mapelli Mozzi,” Andrew wrote on Twitter. “Her Royal Highness and Mr Mapelli Mozzi became engaged while away for the weekend in Italy earlier this month.”

The Duke and Duchess of York are delighted to announce the engagement of Princess Beatrice to Mr Edoardo Mapelli Mozzi.

Her Royal Highness and Mr Mapelli Mozzi became engaged while away for the weekend in Italy earlier this month: https://t.co/HQ2DDObVWY

Beatrice is the first cousin of Prince William and Prince Harry, and she also released a joint statement with Edoardo about her engagement.

“We are extremely happy to be able to share the news of our recent engagement,” the couple said in the statement. “We are both so excited to be embarking on this life adventure together and can’t wait to be married.”

Beatrice reportedly started dating Edoardo in November of last year, soon after she split from her boyfriend of nearly a decade, Dave Clark, in 2016. Last year, she served as maid of honor at her younger sister Princess Eugenie’s wedding to Jack Brooksbank.

Beatrice also debuted her engagement ring, which is a platinum and diamond engagement ring by British jeweller Shaun Leane is worth up to £100k, according to experts. 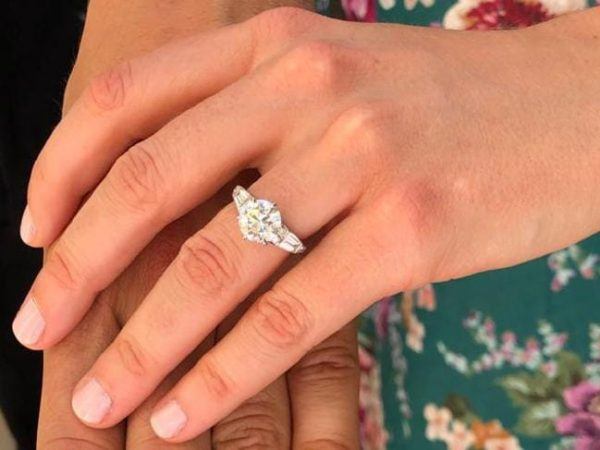 “Princess Beatrice’s is a beautiful engagement ring with a round brilliant cut diamond flanked by 4 baguette-cut diamonds,” said London Jeweler Susannah Lovis. “It is breath-taking particularly because all you can see is diamonds and the platinum band is hidden. It appears to be around 3.5 carats and would probably have cost in the region of £100,000.”