A hilarious photo is going viral this week showing that you should never steal a man’s chocolate, even if you are his wife.

A woman from the United Kingdom was stunned when she opened her refrigerator one morning, only to see a locked safe inside it. Inside the see-through safe was the object that she had been looking for in the first place: her husband’s precious chocolate. 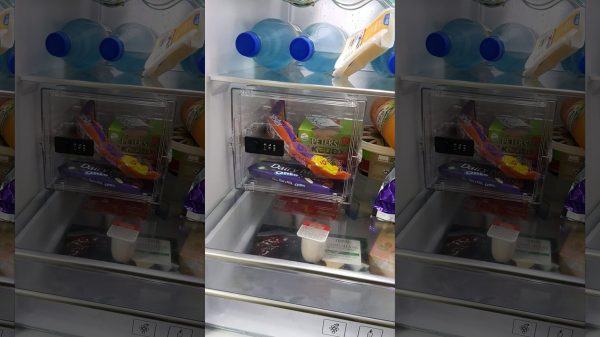 “So this is what it has come to!” she wrote. “You buy a house together, have a child together, get engaged, are planning a wedding and doing your house up and this happens! Dave goes and buys a f—ing fridge safe because he’s an a–h— and doesn’t want to share his chocolate with me anymore! Anyone want him? Surely this is breakup material right?!”

Stacey later updated her post with a link to where she could purchase similar safes, adding, “Think I need to invest in one for myself now, two can play that game!”

“I laughed at first, but then told him it’s like torture because I can see what is in there,” Stacey later told reporters. “It’s like showing me what I can’t have. He’s saying he’s going to get another one for the cupboard now for his crisps and sweets.”

“We are both foodies but I can’t resist chocolate,” she explained.

Stacey added that she was stunned when the post went viral.

“I put it up for family and friends to have a giggle as everyone knows I’m a chocoholic,” she said, “as soon as I eat mine, I end up eating his in the early hours of the morning when I go and get the baby a bottle.”

Stacey concluded by saying that she has no plans to let the safe stop her, and that she will keep guessing numbers until she’s cracked it. Good luck with that, Stacey!