A 64 year-old grandfather from Brazil found a creative way to help kids with various disabilities by doing something that had started as simply a fun hobby.

João Stanganelli Jr., who has vitiligo, took up crocheting last year when health issues forced him to take a step back from working in the food industry. After he figured out how to do rug and animal designs, Stanganelli Jr. decided to make a special doll for his granddaughter that included vitiligo patches so she’d always remember him.

Stanganelli said that his granddaughter loved the doll, and he ended up sharing photos of it on social media. That’s when he started getting inundated with requests from people who wanted their own “vitilindas” and “vitilindos.” 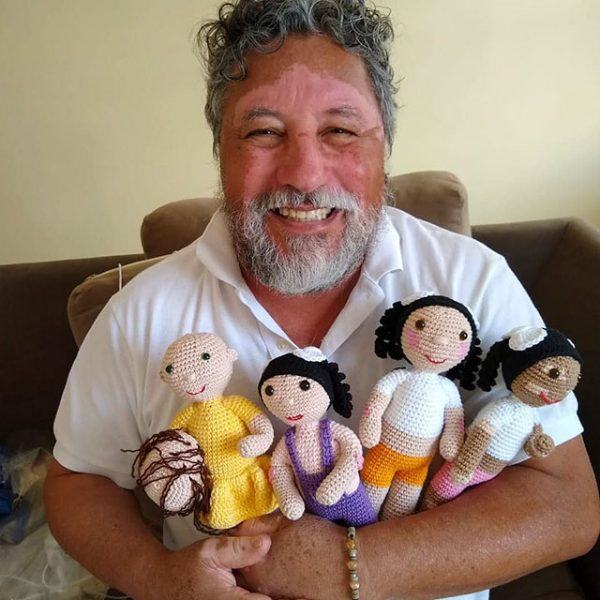 “I feel blessed for the opportunity to bring a little encouragement to people,” he said. “The response is always positive. I’m happy! [The kids] love the dolls and feel represented.”

Stanganelli has since created around 200 custom dolls, and his creations include a doll in a wheelchair, a doll with alopecia and one with a cochlear implant. His creations have inspired people all over the world, and he now has over 10,000 followers on Instagram.

“It’s been wonderful,” he said. “So far it’s only positive.”

Vitiligo is a skin disorder that causes areas of a person’s skin to lose color, and it only affects between .5 and 1 percent of the population.

Stanganelli has vitiligo since he was 38, and he can relate to others who have the same skin condition.

“It has been rewarding, stimulating. I’m happy to be a good influencer,” he said. “Stains on vitiligo are beautiful. What is ugly is stains on people’s character.”