Republican congressman Sean Duffy and his pregnant wife just opened up about the medical challenges they will face after the birth of their ninth child, who has a hole in his heart. Duffy and Rachel Campos-Duffy, both 47, appeared on “The View” after Sean announced he’s stepping down from Congress.

“There are 435 members of congress, there’s only one Duffy dad,” Sean said, with Rachel adding, “The baby does have holes in the heart but also could have some other development challenges.”

Rachel went on to say that they “wanted to create more space in our life,” in preparation for the child’s birth in October. 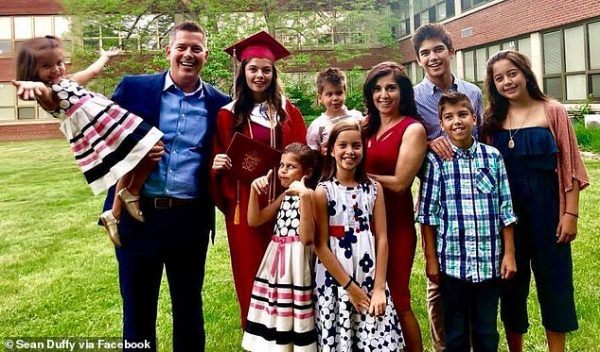 Sean, who appeared on the reality show “The Real World” in 1997 and now represents Wisconsin’s 7th district, said that the hard decision to step down came as he struggled to “balance what is right in service to my country and… to my family.” Explaining their “regrets” and things they have “missed out on,” Rachel said they are simply tired of that after eight and a half years.

While Rachel, who is also a former “Real World” contestant, felt a lot of pride in the fact that her husband was serving his country, she added that it came with a lot of challenges.

“My little kids will say, ‘Look, there’s Daddy’s office.’ That still gives me chills. But you know what? Family first,” she said.

After word of his resignation spread, Sean spoke out to thank all of his supporters.

“I so appreciate all the kind messages from everyone but I’m not dead. Feeling hopeful and looking forward to what the future holds,” Sean tweeted.

We wish the Duffy family the best of luck with their ninth child and with the rest of their family in the coming years. Watch their full interview on “The View” below.