Shawn Beveridge is a crane operator who recently took to Facebook to post a story that has touched the hearts of internet users all over the world. The story serves as a reminder that you should always take the time to make a friend, as you never know what you might end up finding in that person.

“This is my friend Harold!” Shawn began his post alongside the photo below. “Not the guy in the lift but the one behind him in the wheelchair.” 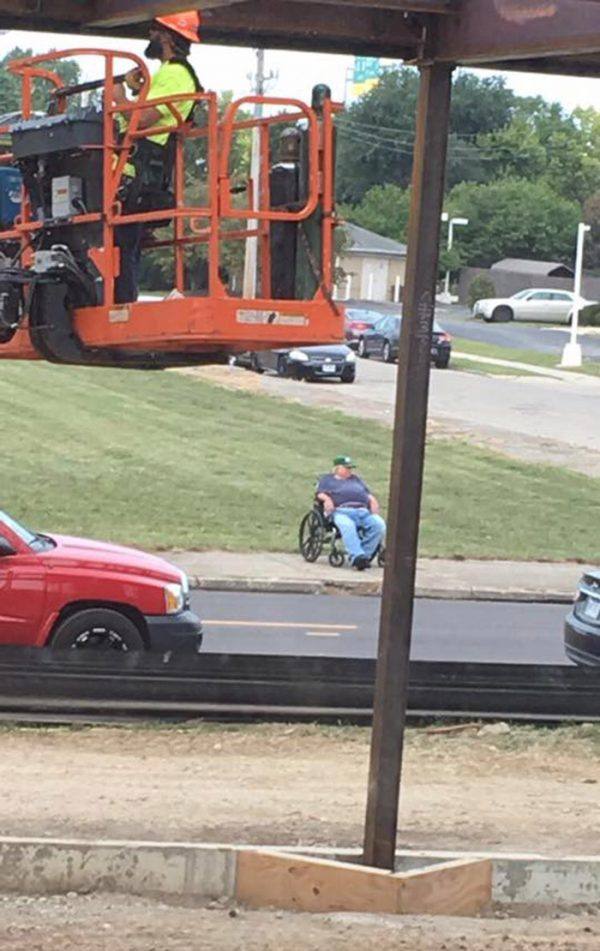 Shawn explained that he has been working at a construction site in Ohio for the past few weeks, and each day, he noticed a man in a wheelchair across the street in front of a nursing home. The man seemed to be watching him intently each day for hours, so finally, Shawn went over to talk to him.

“We had a long conversation, 2 and a half hours worth, but long story short Harold is nearing the end. His heart valves are clogged and some disease has been eating at him for years. He used to be a crane operator,” Shawn wrote. “He said he enjoys seeing what he used to love to do for a living and never thought he’d ever be able to see or be around a crane again and let alone be so close to see one in action.”

“He has family, 2 daughters and a son who haven’t seen him for the last 7 years he’s been in a nursing home,” Shawn continued. “So I made Harold a deal!”

Shawn’s deal was that each day after work, he would sit with Harold for a while to get his take on how he did operating the crane. Harold was overjoyed with this offer, and he took Shawn up on it without hesitation.

“I guess I’m writing this post because if i would have never walked over to him i would have never gotten to know him. I’m thankful to have the opportunity to make this mans last days enjoyable,” Shawn continued. “Filled with purpose and to be able to help him smile again. I challenge any of you on here to not be like I was in the beginning and don’t be afraid to make someone else’s day better.”

“Always try to enlighten someone’s spirits. When God chooses to take this man home I’m happy knowing that I’ve been placed here at this location to make his days better,” he concluded. “I’m happy with that.”

God bless Shawn for taking the time to lift this man’s spirits in such a beautiful way. We need more people in the world like him!