Three Texas churches located in the same Dallas neighborhood have been vandalized with anti-Christian messages written on them in red spray paint.

Senior Pastor Clarence Preston told reporters that he arrived at Beth-Eden Baptist Church in Dallas’s Oak Cliff neighborhood on Sunday morning, only to find the world “lie” spray-painted in red right under the church steeple.

“Well, it’s not something I appreciated,” he said. “As a matter of fact, it was very unappreciated.”

Two other churches just down the street, St. Luke Presbyterian Church and St. Phillips Missionary Baptist Church, were targeted with similar messages. At St. Luke’s the words “scam,” “all lies,” and “not commming” (sic) were found written on the side of the building. In addition, the word “Jesus” with a slash through it was also discovered on the church. 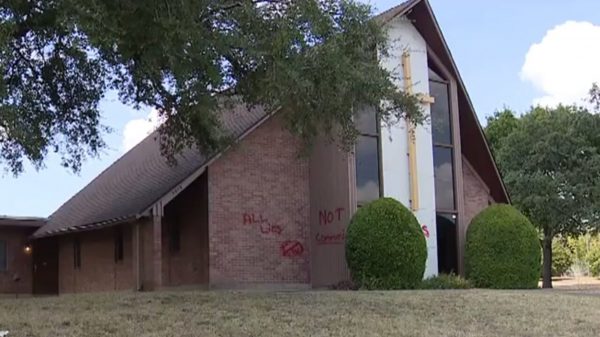 “We do not know the motivation or the rationale as to why they would perpetrate such activity as this,” Preston said.

The Dallas Police Department is still investigating and trying to find out if this was a single person acting alone or a group of people acting together. It seems that the incidents were related because all the churches were vandalized using red spray paint and the word “lies” written on all three.

Graffiti was also found on three other churches in the neighborhood, which could bring the total number of targeted churches to six.

“A lot of the churches have the same message,” said Bishop Ray Campbell of the Ideal Family Church.

Pastor Clarence Preston’s wife, Charles Etta Preston, said afterwards that she thinks whoever is behind this was “crying out for help,” adding that the person still has the chance for redemption.

“We really hope that they will walk through our doors and accept Christ,” she said. “We pray for them.”