A zoo in Pennsylvania just threw an adorable birthday party for their 60 year-old tortoise named Henry, going so far as to make him a birthday cake out of his favorite fruit.

Henry, an Aldabra tortoise, has become something of a viral star ever since a video was posted online of him celebrating his birthday at Clyde Peeling’s Reptiland in the Allenwood Zoo. The video shows Henry having a blast as he enjoys his birthday cake while wearing a stylish silver birthday hat. The birthday cake, which was made of watermelon, included a “60” made from fruit and was topped off with flowers while being served on a plate of leaves.

Kalin Palmatier, a spokesperson for the zoo, explained that the “cake” was made entirely from fruits and vegetables that were held together by “sticks” made from dry spaghetti.

“We decided to throw him a special party for this milestone because we love to treat our animals on special occasions like this,” Palmatier explained. “We felt turning 60 warranted a celebration!” 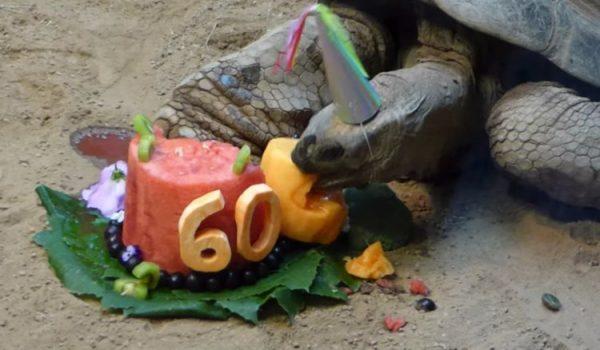 “We actually did something very similar for his ‘roommate’ Al a few years ago,” she added. “Al turned 50 back in 2016, so we also had a party for him.”

Palamtier went on to say that zookeepers often throw birthday parties for their animals.

“We know our guests will enjoy them too,” she said. “We typically advertise these events to the public in case they want to attend!”

She concluded by saying that while zookeepers were all stunned by Henry’s viral status, he didn’t seem to mind himself.

“We were blown away by all the attention,” Palmatier said. “Because we do this type of thing with some regularity, we were not expecting Henry’s video to go viral like it did. Thankfully, Henry is taking it all in stride!”

Check out the video for yourself below.