Darius Dillard and Nate Williams are two cousins and housemates who are being hailed as heroes after they risked their own lives to save a family who was trapped in a burning home.

The cousins were hanging out on their front porch one day recently when they noticed smoke coming out of their neighbor’s house. When they went closer to look, they realized the house was on fire. Darius and Nate immediately called 911, but when they were then told that firefighters could not get there right away, they took action themselves.

Without hesitating, they kicked down the front door and ran inside. Smoke had already filled the corridors of the home, Darius and Nate bend down low so they could search the home without passing out.

“Once it [the smoke] got into your lungs, it was hard. We could have passed out,” Darius explained.

They found the five residents of the home in a bedroom trying to gather their personal belongings. The cousins told the family that there was no time to grab anything, and that they had to get out now if they wanted to escape with their lives. When they got back in the hallway, however, they found that the fire was now blocking the front door, and Darius and Nate had to think fast to put the fire out.

“And we threw the water where the fire was, but the smoke had come to our lungs, so we had to get out as soon as possible,” Nate said. 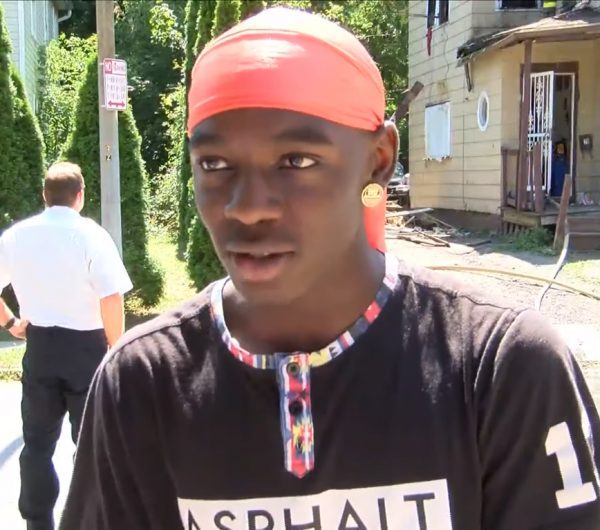 Thanks to Darius and Nate, the entire family escaped with their lives. Firefighters soon arrived on the scene and were able to save most of the home. While the firefighters have praised the cousins for their bravery, they have urged the public not to rush into a burning building under normal circumstances.

“Of course, we don’t suggest that you try to put the fire out. The best thing is to make a quick call to us,” said Deputy Chief Jim Ryan.

Though many have called Darius and Nate heroes, they say they were just in the right place at the right time.

Find out more about this heroic story in the video below.