A young driver is going viral for all the wrong reasons this week after he pushed a BMW given to him by his parents into a river because he wanted a Jaguar instead.

The young man, whose only been identified as Akash, allegedly pushed the brand new car into the river after he got upset it was “too small” for him and his pals. Video shows the car sinking under the water in Yamunanagar, Haryana state in northern India. The car later had to be pulled out of the river using a crane.

“The youth was arrogant and kept insisting that he be given a Jaguar as a BMW is a little small for him and his friends inside,” a police official said. “We would do a preliminary investigation but this seems to be a personal matter. We will proceed according to the law.” 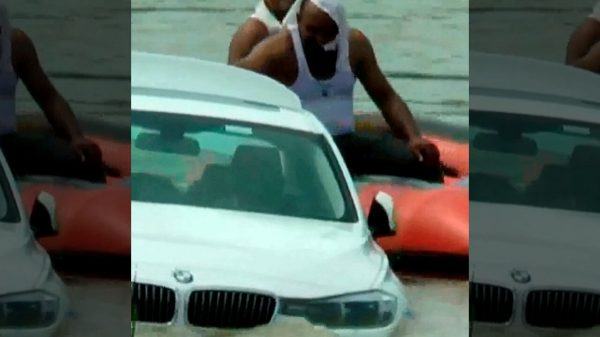 “I wanted to give my son a birthday present,” the father of the man said. “We could only afford to give him a BMW, while he kept on insisting that he be given a Jaguar. He said the vehicle was too small but we thought he will be okay. We never imagined he would do anything like this.”

Video of the incident has quickly gone viral, angering people all over the world.

“After this he should have his license revoked..he makes bad decisions like this, he shouldnt be driving anyhow…see how he likes a fresh bus pass,” one social media user commented, with another adding, “Sounds to me like he’s got 22 years worth of lacking-proper-parenting issues.”

“Spoiled brat. Give the bmw to someone who deserves it,” a third user wrote.

Check out the video for yourself below.