Gregory Randolph is lucky to be alive after he collapsed in the desert with one of his dogs by his side before being rescued by a cyclist who happened to be passing by.

Gregory, 73, was out driving with his two dogs last month when he decided to explore an area of the high desert in Lake County, Oregon. Gregory’s jeep then ended up getting stuck in a remote, dry creek bed in a narrow, roadless canyon. Gregory was completely unprepared for an emergency, and there was no cell service in the area. In fact, when police later found his jeep, it was forty miles away from the nearest town.

After spending one night in his car, Gregory decided to take his dogs Cruella and Buddy and walk away from the jeep on foot. Buddy ended up running back to the jeep, perhaps to get a drink from one of the muddy puddles near it. 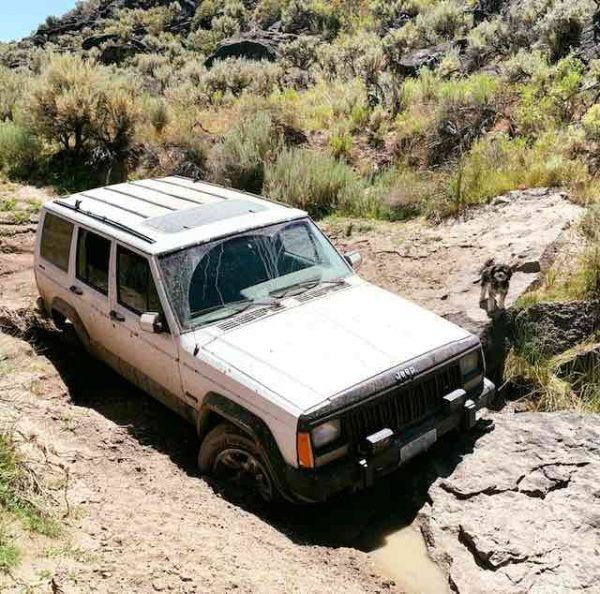 After walking for four days in the desert, Gregory collapsed in the dirt, sunburned and dehydrated. It was not looking good for him at all, but that’s when Portland-resident Thomas Quinones showed up.

Thomas had been out cycling when he saw what he thought was a dead animal.

“I thought, that’s a funny-looking cow,” he recalled. It was only when he got closer that he realized it was a man.

Gregory could not talk or sit up, and he could barely even drink the water Thomas gave him.

“I started noticing that he sometimes would look at me, but his eyes were all over the place, almost rolling into the back of his head,” Thomas said. “Once I got a better look at him, I could tell that he was in deep trouble.”

Thankfully, Thomas had a GPS unit that could send a signal via satellite. He pushed the SOS button and set up a tent to give Gregory some shade while they waited for help to arrive. Thomas even shared some peanut butter with Cruella while they waited over an hour for an ambulance to arrive.

Two days later, police found Gregory’s jeep and Buddy, who was alive but in need of medical treatment.

“It’s still there. It very well could stay there forever,” said Lake County Deputy Buck Maganzini. “I don’t know how he got the Jeep in as far as he did.”

It took three days in the hospital before Gregory could sit up, eat, and have a conversation. It was later determined that he had walked around fourteen miles through the desert before his collapse.