A businessman from Connecticut is being praised this week after he donated motorized wheelchairs to 580 people.

It all started back in 2009 at the pawn shop owned by Philip Pavone, who noticed that there were some motorized wheelchairs in the store that had not been sold. Wanting to clear some space for new inventory, Philip placed an ad in the local newspaper offering to give the wheelchairs away for free. He was stunned to get over sixty letters from interested people over the next two weeks.

That’s when Philip realized just how big this problem really is. Many of the people who wrote to him saying that their insurance would not cover the cost of a motorized wheelchair, which can be $4,000-$40,000, and they could not afford to pay it themselves.

“At that moment, I realized how many people out there were suffering. It was unbelievable,” Philip said. “Some of the people writing to me hadn’t left their homes for months, even years at a time. Many were elderly and had no one to help them.”

Philip is a veteran of the Vietnam War and a cancer survivor, which made him even more sympathetic to these peoples’ plights. Deciding to take action, he began by purchasing and repairing four motorized wheelchairs before giving them away. Realizing that many of motorized wheelchairs are sitting in basements not being used, he also asked people to donate them so that he could fix them and give them away.

During the holiday season each year, Philip throws a massive event that sees him giving away 100 motorized wheelchairs in a single day. A wide range of people have benefited from his free wheelchairs including an elderly Holocaust survivor, a World War II veteran, a woman in her 20s with a rare degenerative disease, and many people living in nursing homes. 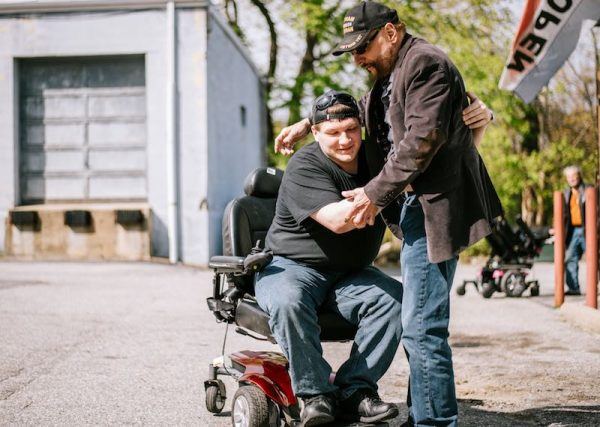 “Once we give these chairs to people and see how grateful they are —the tears and the hugging and kissing—I know we’re making a difference,” Philip said. “These chairs offer a way for people to live an independent life.”

Philip accepts donations from March 1 to October 31, and they can also be dropped off at his pawn shop in Norwich, Connecticut. Volunteers are available to pick up the chairs if they are within a 40-mile radius of the shop. Philip is aiming to give away 100 more chairs this holiday season, so if you want to donate, be sure to look into doing so!