Julia Roberts may be one of the most famous actresses in Hollywood, but she has long preferred to keep the three children she shares with Daniel Moder out of the public eye. That’s why it came as a welcome surprise when Daniel recently posted a photo showing him with his wife and their three kids, 14-year-old twins Hazel and Phinnaeus and 11-year-old son Henry.

On Mother’s Day, Daniel shared a photo of their family along with the caption, “That pretty mama in the middle. We love you so much.”

That pretty mama in the middle. We love you so much.

Julia and Daniel met back in 2000 on the set of the movie The Mexican, which she was starring in and he was working as a camera operator on the set. Julia was dating actor Benjamin Bratt at the time and Daniel was married to his first wife, but the two quickly fell in love.

“On the set, I get pretty relaxed. These guys see me at 5 in the morning, when I come stumbling onto the set like ‘What the hell is goin’ on?’” Julia once said to Oprah Winfrey of the beginning of their relationship. “In those circumstances, you can see what a person’s really made of. Some great friendships can be formed because you see one another at your best and worst.”

The couple got married in 2002 in a private ceremony on Julia’s ranch in Taos, New Mexico. Julia then became pregnant in 2004, and they welcomed twins Phinnaeus Walter and Hazel Patricia in November of that year. 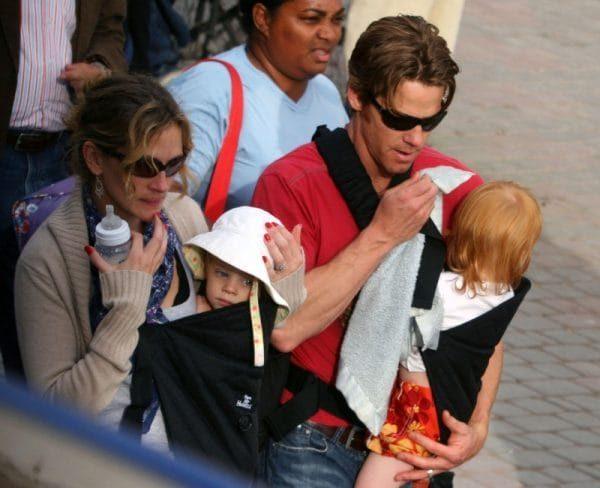 Julia became pregnant again at the end of 2006, and she gave birth to Henry Daniel in November of 2007.

While we can certainly understand why Julia wants to keep her kids out of the public eye, it’s nice that Daniel is giving them a peak at how they are doing and how much they have grown. Julia is lucky to have such an adorable little family, and we wish them the best of luck in the years to come!