Earlier this month, Prince Harry and Meghan Markle welcomed their first child, a baby boy they named Archie. After his birth, Harry and Meghan once again decided to do things their own way when they introduced him to the world in a different way than Prince William and Kate Middleton did with their three children.

While William and Kate showed off their babies to the press within hours of their birth, Harry and Meghan chose to wait two days before introducing Archie to the world. There were many difference in Harry and Meghan’s first photos with Archie compared to William and Kate’s, with one of the main ones being that Harry held the baby the entire time. In contrast, Kate held her babies in most of their first photos.

Today The Duke and Duchess of Sussex are delighted to share their first public moment as a family. They are so incredibly grateful for the warm wishes and support they’ve received from everyone around the world, since welcoming their son two days ago. Photo cred: Chris Allerton ©️SussexRoyal

Harry and Meghan were determined to make their son’s birth as private as possible, while William and Kate kept the press in the loop the entire time during the births.

Meghan had made it clear before she gave birth that she had no intention of participating in the tradition of going out to show off her baby to the press just hours after giving birth. This tradition was started by William and Harry’s mother Princess Diana in the 1980s, and Kate followed it with each of her births. Meghan, however, decided to do things her own way.

There are some commonalities between the couples’ first photos with their babies. For one thing, they both chose to wrap their babies in ivory blankets, leaving their heads free so that photographers could get a peak at them as they snapped their photos. 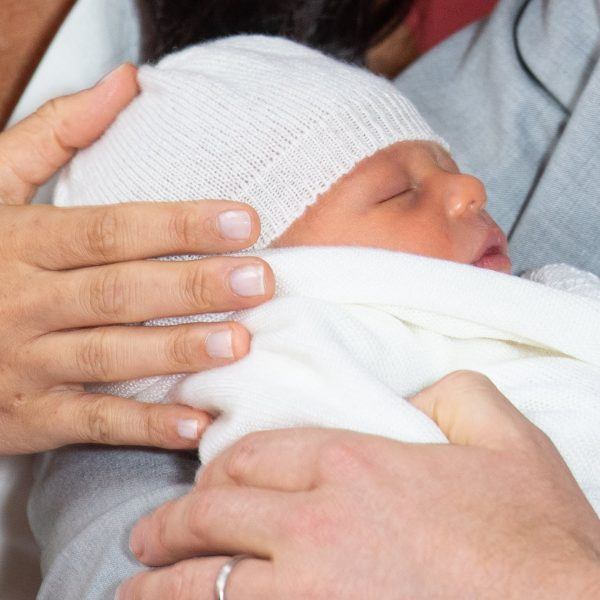 The couples also each clearly loved their babies already in the images, and the love they have for them really comes through in the photos. We can’t wait to see how Harry and Meghan do as parents, and we’re sure that they’ll be just as good as William and Kate are!