Former President Jimmy Carter was rushed to the hospital early Monday morning after he suffered a fall and broke his hip during as he was preparing for a turkey hunt.

Carter, 94, reportedly fell at his home in Plains, Georgia, and though his injury was serious, it was the last thing on his mind, as he had a very different concern instead.

“President Carter said his main concern is that turkey season ends this week, and he has not reached his limit,” Carter Center spokeswoman Deanna Congileo said. “He hopes the State of Georgia will allow him to rollover the unused limit to next year.” 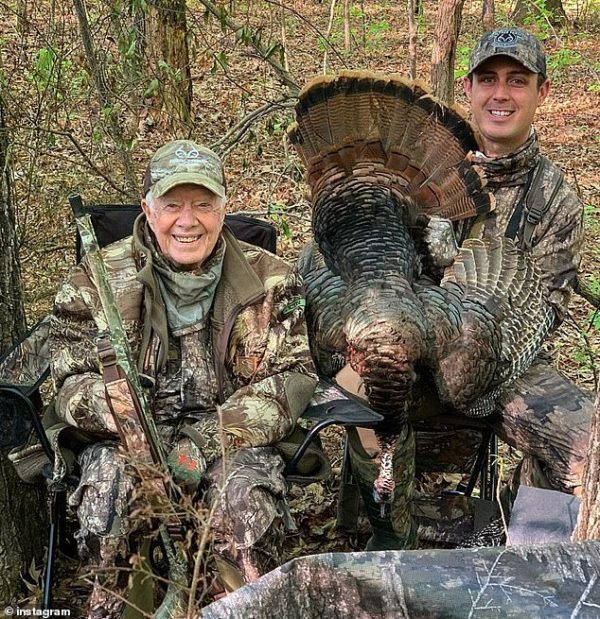 The Georgia Wildlife Resources Division states that residents are permitted to hunt three “gobblers per season.”

His spokeswoman went on to say that Carter is now “recovering comfortably” from surgery at the Phoebe Sumter Medical Center in Americus.

“His surgeon stated that the surgery was successful,” a statement from his office read.

Prayers have been pouring in for Carter from all over the country, including from President Donald Trump.

“Wishing former President Jimmy Carter a speedy recovery from his hip surgery earlier today,” Trump tweeted. “He was in such good spirits when we spoke last month – he will be fine!”

Wishing former President Jimmy Carter a speedy recovery from his hip surgery earlier today. He was in such good spirits when we spoke last month – he will be fine!

Carter became the oldest living president in March after the death of George H.W. Bush. In addition, he is the president who has lived the longest since leaving office, as it has been over 38 years since Ronald Reagan succeeded him in 1981.

This isn’t the first time Carter has suffered a medical scare in recent years. In August of 2015, he revealed that he had a melanoma in his brain and liver and was undergoing radiation treatment. By the end of that year, he was declared to be cancer free.

“I’ve had a wonderful life,” Carter said at the time. “I’ve had thousands of friends, I’ve had an exciting, adventurous and gratifying existence.”

Find out more about Carter’s current situation in the video below.