A Florida family of three is considering themselves lucky to be alive this week after their car sank to the bottom of Lake Silver in Winter Haven last Saturday. Luckily for them, a water-skiing tournament was taking place in the lake at the time, and water-skiers were able to rush to their rescue.

It all started around 10:30am, when Henry Saint-Hilaire was out driving with his wife and their 2 year-old daughter. Suddenly, his steering locked to the left, sending their vehicle into the lake. 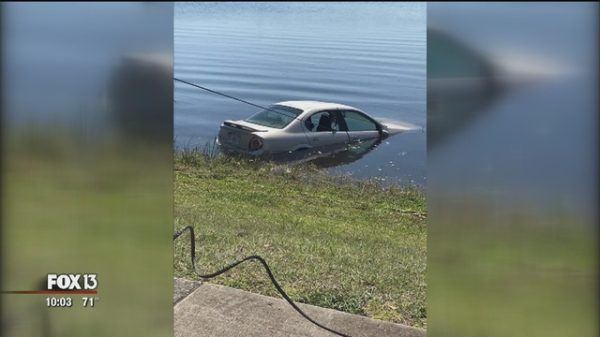 The water-skiers saw the car as soon as it went into the water, and they immediately took action.

“She says, ‘Mom, a car drove right in the lake right over there,'” said Rosemary Angsten, a member of the Cypress Gardens Water Ski Team.

Finally, the water-skiers reached the car, but saving the family was easier said than done.

“I was banging on the window and begging her to unroll the window or unlock the door and there just was no reaction,” Rosemary said. “So, we’ve been told the family was in shock.”

They tried to break the car window as the vehicle continued to sink, but nothing was working.

“There was that split where I thought, ‘That’s it. There’s nothing we can do for them,'” recalled bystander William Simmon.

Finally, a Good Samaritan grabbed a tire iron and smashed the car window.

“He busted the window,” said Kat MacCalla. “He reached in, grabbed the baby out and in the process got a pretty bad gash in his arm.”

After a lot of work, they were able to get all three family members out of the car.

“It’s really difficult to describe the amount of relief because there was a moment that I thought we failed,” Rosemary said. “I don’t think we did anything different than probably anybody else would’ve done. We just happened to be in the right place at the right time.”

Public Safety Director Charlie Bird praised all those who came together to help this family, who did not want to speak to the press.

“This is just one more example of the wonderful citizens in Winter Haven coming to the rescue without hesitation,” he said. “This family undoubtedly survived this crash because of these good Samaritans who took no regard for their own safety to ensure the family was rescued.”