Tanner Wilson is a teenage boy who just did something for his best friend that will definitely restore your faith in humanity.

Tanner is best friends with Brandon Quallsm, who is a fellow classmate of his at Caddo Hills High School in Norman, Arkansas. Brandon suffers from disabilities that make it necessary for him to use a wheelchair, but his manual chair would give him aches and pains that would leave him exhausted throughout the day, affecting his performance in school. Noticing how much Brandon was struggling and how sad this made him, Tanner decided to do something to help him.

Tanner started saving up money that he earned from the part-time job he had to buy his friend a new wheelchair.

It took him two years, but Tanner finally saved up enough money to purchase a new electric wheelchair for Brandon! When Brandon saw the chair, he immediately was overcome with emotion and burst into tears.

“They came in and my face just blew up… crying everywhere,” Brandon said. “[I was] just like, ‘Wow, can’t believe he did that for me!”

Tanner refused to take too much credit for what he did, simply saying that Brandon was a “really good friend” who deserved the chair. A teacher at the school gave Brandon some orange flame stickers to spice up his wheelchair, making his new ride even cooler! 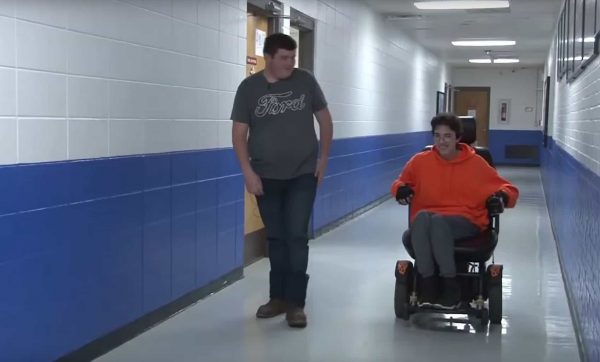 Brandon’s new chair allows him to speed around the hallways of his school with ease without needing to take any rests. He also knows that he has a friend for life in his best buddy Tanner!