Golfers on a golf course in Georgia got the surprise of their lives this week when they witnessed an 11 foot alligator casually make his way onto the green!

Ed Vance and his friends were on the 17th hole at the Savannah Harbor Club on Hutchinson Island when the alligator suddenly walked out of a bush and nonchalantly sauntered onto the green. As Ed and his friends shouted in shock, the alligator paid them no mind, even stopping to sun himself just inches from the hole at one point! 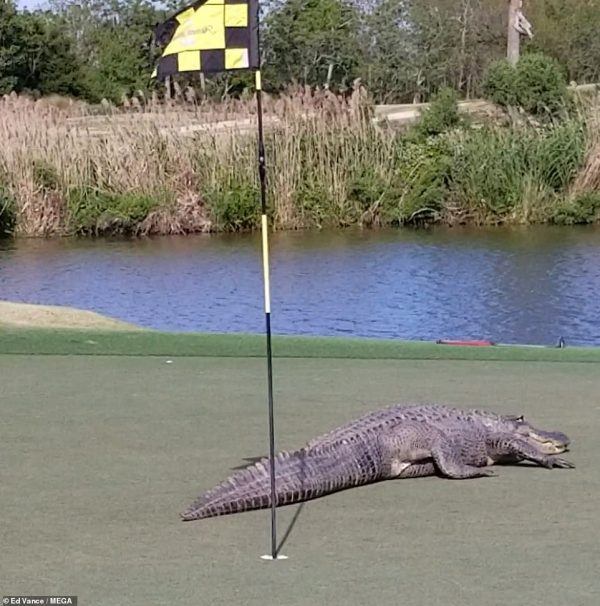 Ed managed to record the hilarious moment on his phone, and he can be heard saying, “That is nuts. Dude, that’s a monster.” Another friend of his then joked, “Y’all wanna play through?”

“We weren’t scared, we were in awe,” Ed explained afterwards. “We see alligators out there all the time but not that size and not like that. They are usually just laying next to a pond or are in a pond around the golf course.” 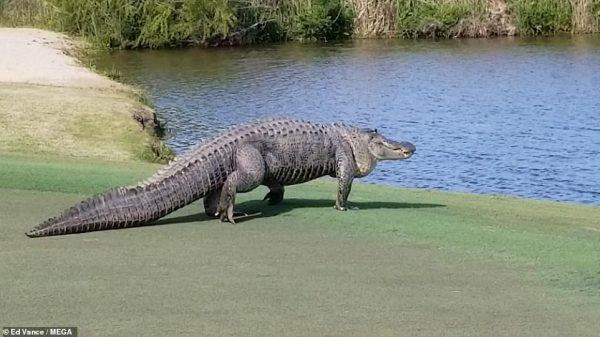 “When it came out of the brush from behind the green, we were amazed because of how huge it was,” he continued. “It was at least nine feet, probably close to 11. Once it made it on to the green, you could hear a thud from each step it took, almost like you would think a dinosaur would sound like.”

Alligators are typically found in the wet marshes of Florida and Louisiana, but they can also be found in southern Georgia, Alabama, Mississipi, the coastal Carolinas, and east Texas. In addition, they can be seen in the southern most part of Arkansas and the southeast corner of Oklahoma.