Hilarious Moment Father Drags Daughter Through Airport By Her Hood

Any parent knows how difficult it can be to travel with small children. Traveling is boring, which means many children get antsy when going through the airport and tantrums can ensue. Now, a video is going viral showing a father dealing with his daughter’s sulking in the airport in a hilarious way.

The father can be seen dragging his daughter by her hood through the baggage claim at the Washington D.C. airport as if she is a piece of pink carry-on luggage! The dad, who was traveling with his daughter on New Year’s Day, clearly had enough of her nonsense!

Meanwhile, the daughter has her hands clasped in front of her as she is being dragged, perhaps trying to stubbornly make it look like she does not care about the treatment she is receiving. 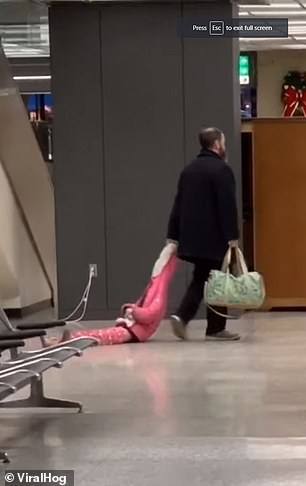 “I was waiting at Dulles International Airport to pick up my girlfriend on New Year’s Day when I noticed this father literally dragging his daughter through the airport by the hood of her jacket,” the person who captured the moment on camera said, adding that the girl “wasn’t screaming or anything, just hanging out while another girl, presumably her sister, was walking 20 feet behind her out of embarrassment.”

Video of the dragging has quickly gone viral, being viewed over 1.5 million times!

“Oh man, I’m sure every parent has reached this level of frustration,” one social media user commented, with another adding, “Give this man a medal!”

“Sometimes kids just don’t listen to reason,” a third user wrote. “Gotta do what ya gotta do when dealing with stubborn humans. No harm done here!”