An Air Force veteran has been reunited with his beloved service dog, who had been missing for 22 days, thanks to the hard work of a pet detective.

Like many veterans, Larry Peteet of Land O’Lakes, Florida suffers from PTSD. He relies on his emotional support dog Sandy Girl to get him through the day, which is why he was devastated when she went missing after he was recently in a car accident. The dog was in Larry’s car at the time of the accident, and a first responder asked the veteran what he wanted to be done with the dog as he was taken to the hospital. Larry told the paramedic that he wanted Sandy Girl to be taken to a specific neighbor, but when he got out of the hospital three days later, this neighbor did not have the dog.

Larry went into panic mode when he realized he had no idea where Sandy Girl was.

“When it first happened, it was all I could do to not freak out and lose my mind,” he said. “She’s my baby girl, the love of my life. I love her more than anything. So, it’s horrible.” 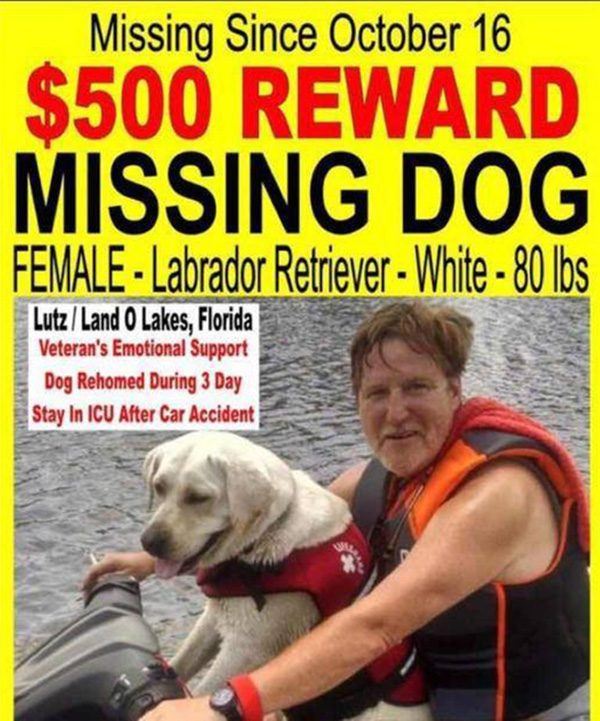 Larry searched local animal shelters and contacted the Pasco County Sheriff’s Office. An officer then interviewed all of his neighbors, and finally talked to one who had asked someone at a local dog park to watch Sandy Girl because he had to fly to California.

Finally, Larry contacted Fort Lauderdale pet detective Jamie Katz, but he was starting to lose hope since she had been missing for 22 days. Jamie went right to work, and a man soon called him to let him know that he had Sandy Girl! The man had been told that the dog had been abandoned, so he had agreed to take her in, but he now wanted to get her back to Larry as soon as possible.

Jamie filmed the reunion of Larry and Sandy Girl, and it’s sure to bring tears to your eyes! Check it out below!

<<<>Look Who’s Home<>>> Missing for 22 days in Lutz, FL… Sandy Girl is now SAFE & Home!!!! A good Samaritan called this morning to tell us he had Sandy Girl!!! His boss saw the news segment on WFLA News Channel 8 last night and called us right away!!! Steve (The good Sam) was given Sandy after he was told she was abandoned…. Welcome Home Sandy Girl & CASE CLOSED!!!! #lookwhoshome Jamie Katz Pet Detective PI Jamie Katz #WFLA #OnYourSide #caseclosed