Lovel Layne of Weber County, Utah, is a spry 92-years-old. He served in the U.S. Army in the Philippines, remembers when he made $3 an hour at a job decades ago, and now enjoys working outside in his garden.

But he’s not quite as steady as he used to be. He has to use his walker or wheelchair to get around most days, and here lately that’s been a big problem. So much so that the local fire and rescue department have had to come to his aid twice.

Lovel says he’s gotten worse over the past six months and it has been a struggle to get up and move around without help. Which wouldn’t be too much of a problem if it weren’t for the flimsy ramp in front of his house.

The ramp is old and worn down, and it’s too narrow for Lovel’s wheelchair or walker to go down. So the last time he tried on his own, emergency workers had to come assist him because he fell.

That’s when the fire department realized what was really the problem, and they decided to do something about it. Although they love coming to visit Lovel, they hated seeing him on the ground and hurting.

So one day in the beginning of October, a group of firemen met at Lovel’s house and dismantled the old ramp. They replaced it with a new ramp that was wider and sturdy so that Lovel could use his wheelchair or walker on it safely.

Lovel says their kind gesture has really helped him and he is very grateful for what they have done. The firemen say they will continue to stop by and see the veteran, but hopefully not because he has fallen. 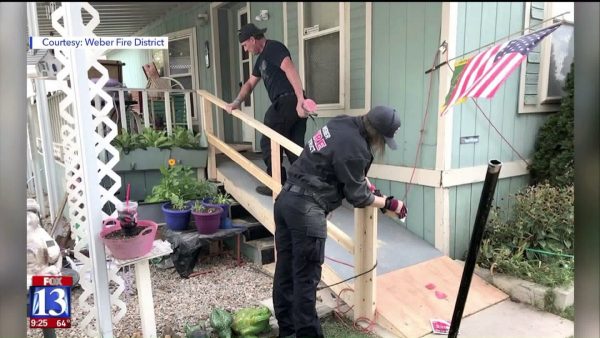 Check out the video below of their good deed and be sure to share it with your family and friends. We all need to help each other out like these firemen did Lovel.