It’s about that time of year where we make a batch of hot chocolate, cuddle up underneath a cozy blanket, and waste away our weekends and evenings watching Christmas movies.

Of course there are always the classics, but Netflix has plans to release a new movie that might just be a new favorite. The movie is titled “The Christmas Chronicles” and stars actor Kurt Russell as Santa Claus.

The story is rather familiar. Two kids are hoping to see the real Santa when he comes to their house on Christmas eve. To their dismay, they crash his sleigh leaving Christmas eve in an uproar.

The kids, along with Santa and his elves, have to band together to save the day. Although there isn’t anything particularly new about the plot, the movie stars Kurt Russell, and who is better to play Santa than him?

The director of movie “Home Alone”, Chris Columbus is directing the new Netflix movie. He also produced “Harry Potter and the Sorcerer’s Stone” so you can expect this movie to be a hit too.

The movie premiers on Thanksgiving, but a trailer of the movie was recently released by Netflix to get us looking forward to what is to come in the very near future.

In addition to Russell, the movie also features Darby Camp and Judah Lewis as the pair of siblings that make a major mistake and almost ruin Christmas for everyone. 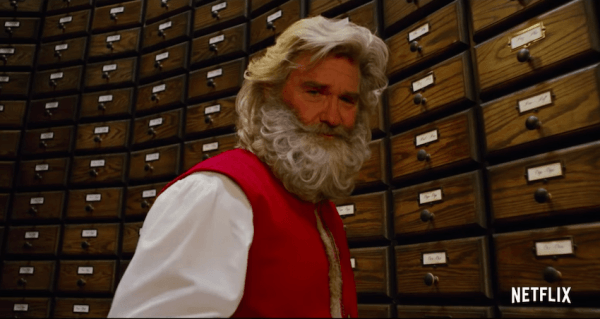 Check out the trailer of the video below and be sure to share this with your family and friends. This is one they will want to plan to watch now!