Friendship is a very important thing, as a good friend can brighten up our day and bring a smile to our faces. Friendship is especially important to young children who are just learning the ways of the world for the first time.

Ruby and Abbie are too little girls who are best friends that communicate in a very special way. They do this because Ruby is unable to walk or talk, but that doesn’t stop her from giggling along with Abbie!

Ruby is one of just 100 people in the world who suffers from H-ABC. 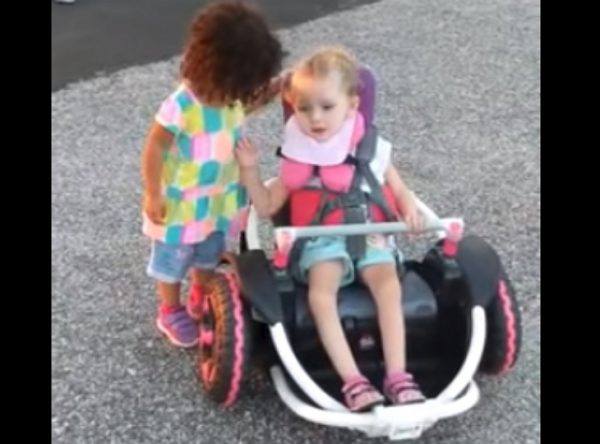 H-ABC stands for Hypomyelination with Atrophy of Basal Ganglia and Cerebellum, and causes Ruby to be unable to do many of life’s simplest functions. Eventually, the disease will shrink her brain. For now, however, Ruby is treasuring the happy moments she gets to spend with Abbie.

Ruby’s mother recently captured an adorable video of the two girls that is melting the hearts of internet users all over the globe. The video opens with Ruby sitting in her motorized wheelchair as Abbie approaches her. Abbie puts her hand behind Ruby’s head to let her know that she is there, and they stand together for a little while. Then, Abbie helps move Ruby’s hand to the bar that controls the wheelchair and powers it up. 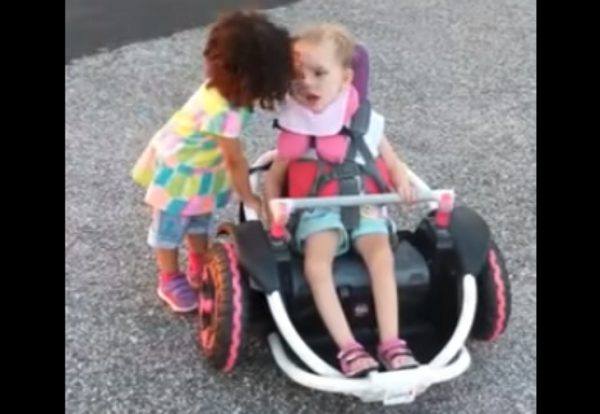 Suddenly, Ruby speeds off in her wheelchair as everyone laughs! Abbie runs over to her and whispers something in her ear that makes Ruby laugh, which is music to her mother’s ears. Ruby’s mother describes the relationship that she has with Abbie as “pure love.”

Check out this adorable video below, and SHARE this story so your friends and family can see this as well!