4 Teens Follow Young Girl After Sensing Something Is Not Right – Now They’re Heroes!

Four Canadian teenagers are being hailed as heroes after they went above and beyond to save a girl when they sensed something was not right.

Arnaud Nimenya, Carsyn Wright, James Hielema and Starlyn Rives-Perez were all skateboarding together in a mall’s underground parking lot when they noticed a 15 year-old girl who appeared to be intoxicated being dragged by a man who claimed to be her father. The boys were disturbed when they noticed the man was dragging the girl by force.

“She was screaming and yelling. She just wanted to be out of there. She was all scuffed up and dirty,” Wright recalled.

Sensing something was wrong, the four boys confronted the man to get more information. The man insisted he was her father, and the girl did not say anything, so the boys left the garage. However, their guts still told them that something was wrong about the situation.

“You don’t want to really think of the worst in somebody like that. You don’t want that situation to be real, so you just brush it off and hope for the best,” Wright said.

The boys decided to go back into the garage to talk to the man again, but when they got there, they discovered he was sexually assaulting the girl, so they immediately took action to save her.

“You walk in, and you see something like that, and you freeze. You don’t know what to do,” Nimenya said.

As soon as the man saw the boys, he tried to run away.

“He was trying to walk out and walk away from us,” Nimenya said. “He pushed me aggressively out of the way, kinda like just gives me the smile, like, ‘I can do this. You can’t do anything about it.’”

The boys weren’t about to let him escape, however, so while one of them stayed with the girl, the other three chased him down. The man grabbed one of the teens’ skateboards and used it to try and fight them, but the boys managed to keep him occupied until police arrived and arrested him.

The local police praised the boys as heroes and invited them to the Chief’s Awards Gala, where they were given an award recognizing them for their exceptional act of bravery. 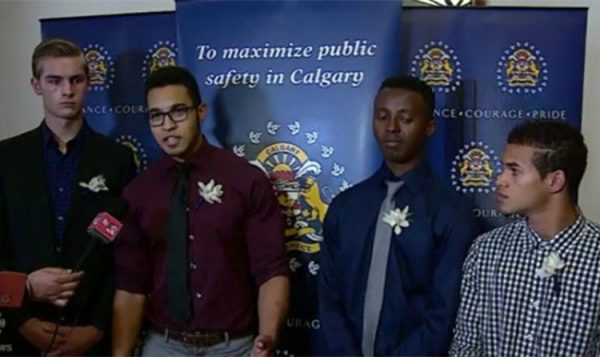 “You can’t just leave a girl and she was a young girl,” Wright said when asked why they turned back. “She was 15 years old and she needed help and we needed to be there for her. I hope anybody else who’s in that situation would come to her help because it’s just the humane thing to do.”