The largest gathering of brown bears happens every year in Alaska’s McNeil River State Game Sanctuary between June and August, with bears arriving at the river’s falls to fish for salmon.

Though the park limits human access, a handful of lucky people are permitted to come and take photos of the bear congregation. The visitors have to behave very calmly while they are there so as not to frighten the bears. 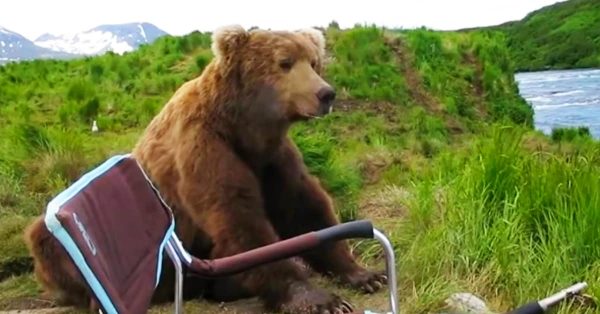 The video below this story was shot by Drew Hamilton, a tech worker at the Alaska Department of Fish and Game. He was sitting in a camping chair filming the river at the park when a large brown bear started walking straight towards him! Knowing he had to stay calm, Drew stayed where he was and tried not to move.

Noting how relaxed Drew seemed, the bear decided to sit down right next to him and join him in watching the river! The bear yawned while he enjoyed the peace and quiet as Drew continued sitting behind him in shock. Eventually, the bear got up to go join some other bears who were fishing nearby.

Drew was relieved when the bear walked off, leaving him with an amazing story to tell his family and friends! Most people would have been terrified in a situation like this, so we applaud Drew for keeping his wits about him! I’m not sure if I could have stayed nearly as calm as he did.

Check out the video of this encounter below, and SHARE this story so your friends and family can see it as well!